Link to this page

In Bed: The Kiss
Order a Hand-Painted Reproduction of this Painting 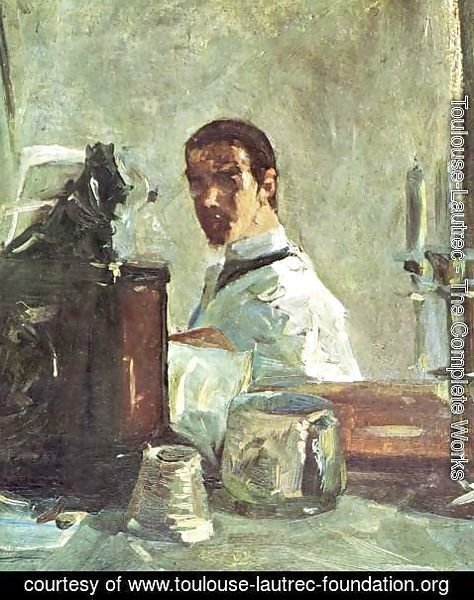 Henri Marie Raymond de Toulouse-Lautrec Monfa was born in Albi, Tarn in the Midi-Pyrenees region of France, the firstborn child of Comte Alphonse and Comtesse Adele de Toulouse-Lautrec. An aristocratic family (descendants of the Counts of Toulouse) that had recently fallen on hard times, the Toulouse-Lautrecs were feeling the effects of the inbreeding of past generations; the Comte and Comtesse themselves were first cousins, and Henri suffered from a number of congenital health conditions attributed to this tradition of inbreeding (see below). A younger brother was born to the family on 28 August 1867, but died the following year. 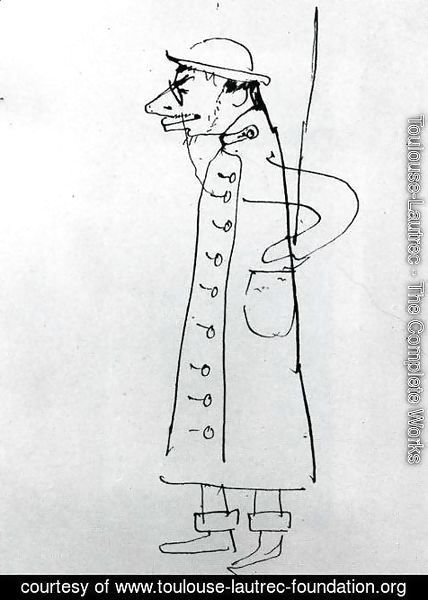 At the age of 13 Henri fractured his left thigh bone, and at 14, the right. The breaks did not heal properly. Modern physicians attribute this to an unknown genetic disorder, possibly pycnodysostosis (also sometimes known as Toulouse-Lautrec Syndrome), or a variant disorder along the lines of osteopetrosis, achondroplasia, or osteogenesis imperfecta. Rickets aggravated with praecox virilism has also been suggested. His legs ceased to grow, so that as an adult he was only 1.54 m (5 ft 1 in) tall, having developed an adult-sized torso, while retaining his child-sized legs, which were 0.70 m (27.5 in) long. He is also reported to have had hypertrophied genitals.

Physically unable to participate in most of the activities typically enjoyed by men of his age, Toulouse-Lautrec immersed himself in his art. He became an important Post-Impressionist painter, art nouveau illustrator, and lithographer; and recorded in his works many details of the late-19th-century bohemian lifestyle in Paris. Toulouse-Lautrec also contributed a number of illustrations to the magazine Le Rire during the mid-1890s. 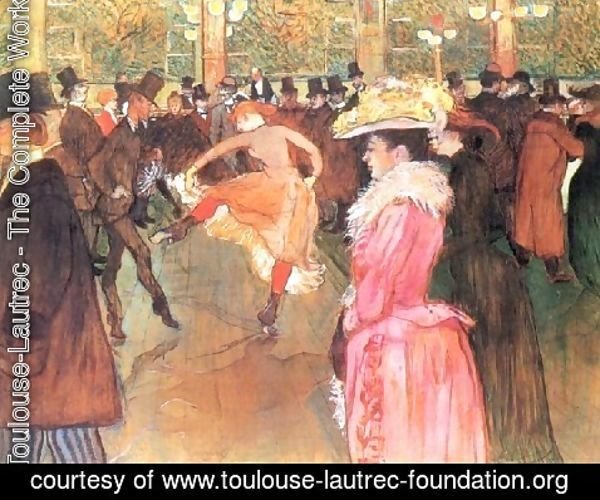 Toulouse-Lautrec was drawn to Montmartre, an area of Paris famous for its bohemian lifestyle and for being the haunt of artists, writers, and philosophers. Tucked deep into Montmartre was the garden of Monsieur Pere Foret where Toulouse-Lautrec executed a series of pleasant plein-air paintings of Carmen Gaudin, the same red-head model who appears in The Laundress (1888). When the nearby Moulin Rouge cabaret opened its doors, Toulouse-Lautrec was commissioned to produce a series of posters. Thereafter, the cabaret reserved a seat for him, and displayed his paintings. Among the well-known works that he painted for the Moulin Rouge and other Parisian nightclubs are depictions of the singer Yvette Guilbert; the dancer Louise Weber, known as the outrageous La Goulue ("The Glutton"), who created the "French Can-Can"; and the much more subtle dancer Jane Avril.

Toulouse-Lautrec spent much time in brothels, where he was accepted by the prostitutes and madams to such an extent that he often moved in, and lived in a brothel for weeks at a time. He shared the lives of the women who made him their confidant, painting and drawing them at work and at leisure. Lautrec recorded their intimate relationships, which were often lesbian. A favourite model was a red-haired prostitute called Rosa la Rouge from whom he allegedly contracted syphilis.

Toulouse-Lautrec gave painting lessons to Suzanne Valadon, one of his models (and possibly his mistress as well).

An alcoholic for most of his adult life, Toulouse-Lautrec was placed in a sanatorium shortly before his death. He died from complications due to alcoholism and syphilis at the family estate in Malrome, fewer than three months before his 37th birthday. He is buried in Verdelais, Gironde, a few kilometers from the Chateau of Malrome, where he died.

The invention of the Tremblement de Terre is attributed to Toulouse-Lautrec, a potent mixture containing half absinthe and half cognac. 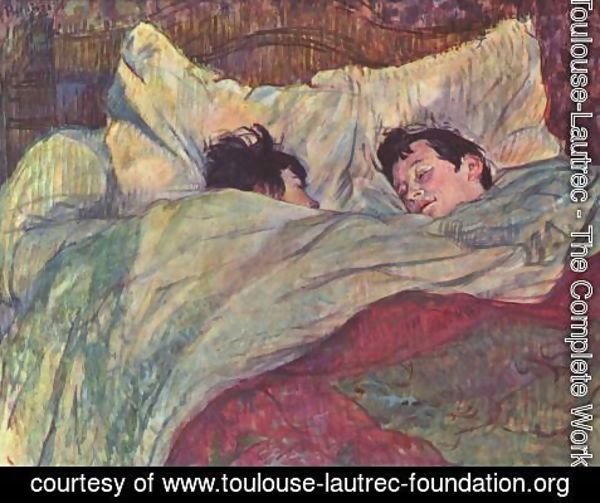 Throughout his career, which spanned less than 20 years, Toulouse-Lautrec created 737 canvases, 275 watercolors, 363 prints and posters, 5,084 drawings, some ceramic and stained glass work, and an unknown number of lost works. Toulouse-Lautrec is known along with Cezanne, Van Gogh, and Gaugin as one of the greatest painters of the Post-Impressionist period. His debt to the Impressionists, in particular the more figurative painters Manet and Degas, is apparent. In the works of Toulouse-Lautrec can be seen many parallels to Manet's bored barmaid at A Bar at the Folies-Bergere and the behind-the-scenes ballet dancers of Degas. He excelled at capturing people in their working environment, with the colour and the movement of the gaudy night-life present, but the glamour stripped away. He was masterly at capturing crowd scenes in which the figures are highly individualised. At the time that they were painted, the individual figures in his larger paintings could be identified by silhouette alone, and the names of many of these characters have been recorded. His treatment of his subject matter, whether as portraits, scenes of Parisian night-life, or intimate studies, has been described as both sympathetic and dispassionate.

Toulous-Lautrec's skilled depiction of people relied on his painterly style which is highly linear and gives great emphasis to contour. He often applied the paint in long, thin brushstrokes which often leave much of the board on which they are painted showing through. Many of his works may best be described as drawings in coloured paint.

After Toulouse-Lautrec's death, his mother, the Comtesse Adele Toulouse-Lautrec, and Maurice Joyant, his art dealer, promoted his art. His mother contributed funds for a museum to be built in Albi, his birthplace, to house his works. As of 2005, his paintings had sold for as much as US$14.5 million. (From Wikipedia)

Report an error on this page